Given an executable that has been compiled with debugging information included in the executable (e.g. gcc -g source.c) we can use the gdb debugger on it and view its assembly code in order to see how it works.

Below I show you how to debug a program named bomb1 which asks the user to enter a passcode and based on that value entered, prints either “Defused” or “Boom!”.

All of the commands shown below can be found in the comprehensive documentation for gdb found here.

Below we run gdb with the -tui switch on the executable named bomb1.

When gdb is running you will see the gdb command prompt from which you can, as the name suggests, issue gdb commands.

To view the assembly code in the window we issue the layout asm command.

If the executable expects input from stdin (i.e. the keyboard) we can place text in a file and redirect the contents of the file to stdin when we run the executable in gdb.  Similarly we can tell gdb to redirect output intended for stdout (i.e. the console) to a file.

Below I redirect text in the file named input1.txt to stdin (using < input.txt) and redirect output from stdout into a file named output1.txt (using > output.txt).

If we inspect output.txt we will see all of the output that the executable typically prints to the screen.

Throughout this debugging process, if you ever need to restart back up at main, simply issue the stop command and then the start command.  The start command will reissue the previous run command. 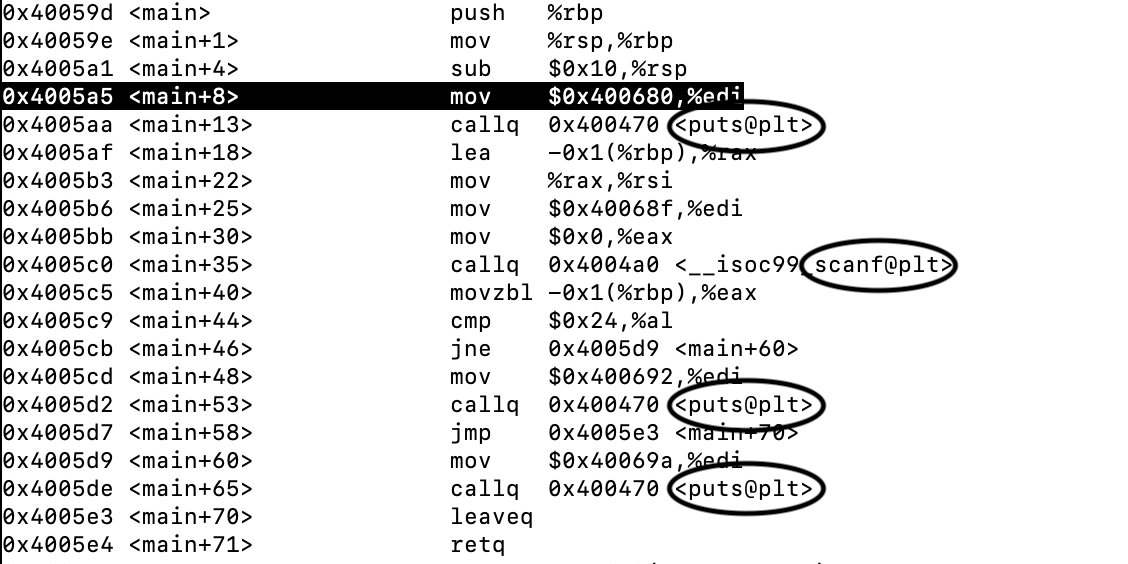 Before we continue, let’s look at a few commands that enable us to view the values that are stored in RAM and in registers.

Since we are in TUI mode we can view the values in all registers in a window using the following command:

Now we’re ready to walk through the assembly code.  To step to the next assembly instruction we can use the ni command.

After the call to scanf we see that a value is moved into %eax.  This is the value that is scanned in from the input file.  The lower byte of the %eax register, namely %al, is compared to 0x24 (decimal 36) and if they are not equal then a conditional jump to 0x4005d9 is performed.  Notice that 0x4005d9 is the address of the mov instruction right before a puts call.  The mov instruction moves the address 0x40069a into %edi which is used by puts.  If you examine the value at 0x40069a and format it as a string you will see the address holds the string “Boom!”

So if the value of the single byte in %a1 is not equal to decimal value 36 the program prints “Boom!”.  What type in the c programming language uses a single byte? A character.  So what is the character with the decimal value 36?  That’s the input that will diffuse the bomb!